Really, I do. It is such a great concept, and I hope the developers do really really well with it. (If you haven't gotten your invite to Ravelry yet, then I'm sorry if this sounds like taunting or bragging. Trust me, your patience will be rewarded.)

The only downside (and I admit that the fault lies entirely with me) is that I now have so much less to blog about. I started blogging mainly as a way to keep my projects (current and future) organised, and to help keep my few online knitting friends up-to-date on my progress, without flooding our message board with FO posts. I did slowly become more accustomed to writing about knitting as lifestyle, almost approaching actual journaling levels (which is so bizarre to me, since every diary I've ever owned contains two to three very bland "introductory" entries before my interest waned and it became buried under stacks of "Seventeen" magazine).

So I'm going to give blogging-as-journaling a shot, please bear with me (and I'm going to need to learn how to spell "journaling", since this is 3 times now I've written it with two ls. Thank you little red line...)

not so very long ago 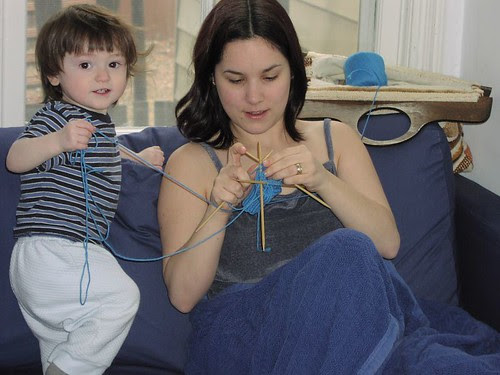 I couldn't resist posting this. I found it buried in my crafty folder while adding projects to Ravelry.

This must have been taken around February or March 2004. I'm knitting my first sock ever, for Miles (out of Pingouin 100% cotton. Sigh. I've learned so much).

The knitting bag behind me was hand-woven by my mother, for her mother.

There are so many things in this photo that make me so very very happy.
Posted by Anonymous at Sunday, June 10, 2007 2 comments:

I crawled with the Yarn Harlot...

Not to mention about 20 other fabulous knitters. I'm sure everyone has seen some version of this picture a thousand times, but I find it so farking hilarious that I have to share my own version. 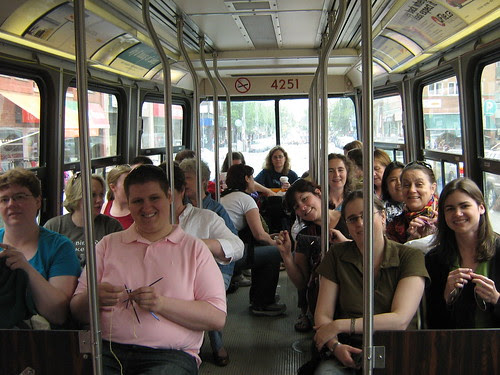 The whole day was awesome. If you want details, go to the Yarn Harlot's blog. She tells it better than I could.

A few assorted photos from the Toronto Extravaganza, just for my entertainment: 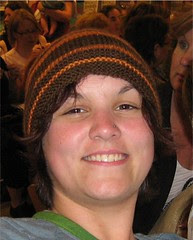 This is actually the night before at the book release. Just before I was to give the hat I knit to the Harlot, I realised I didn't have a picture of it. This picture didn't show much of the hat, but it did manage to capture me in all my flushed-and-sweaty glory (In case anyone was wondering, it does get warm in a bookstore filled with hundreds of knitters, and donning a wool hat does nothing to relieve it, surprisingly)

Side note- this photo was taken by the lovely Erin, who I just happened to sit down next to in line, and ended up being my crawl buddy the next day as well. I got to make sure she didn't pass out at Romni. Hee!

First stop on the crawl was The Naked Sheep (again, I'm not going into major detail, I'm not linking to all the stores, it's all on Stephanie's blog, as well as about a dozen others). I convinced my wonderful friend/spare mum Gaye to pose for a "First Sock" photo. It's a dandy first sock. 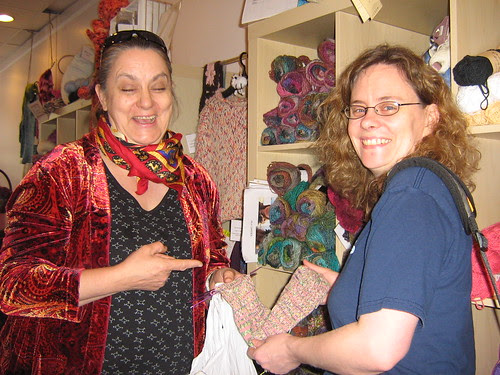 At Americo, I bought some lovely handspun llama that matches my knitting bag. When I got home that evening, my 4 year old decided to wear it. On his face. 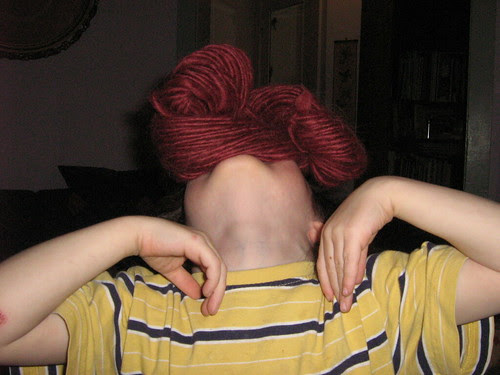 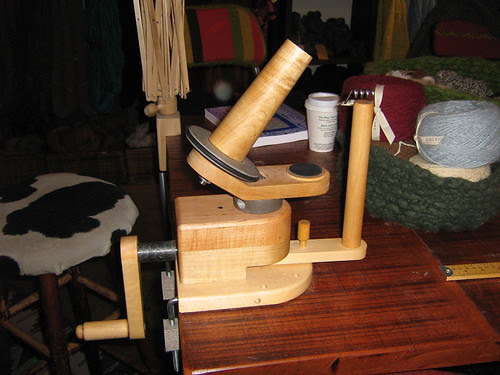 Note to self: Find out if Sherri ever got a quote on that. Live vicariously through Sherri. Sigh.

Romni, Lettuce Knit, Big Fat Burritos. It's not that this wasn't all awesome, I just don't have anything to add that hasn't been said. That's what I get for procrastinating.

Alterknit was a great place to wind down. Yummy iced coffee. And their front window display still has me giggling: 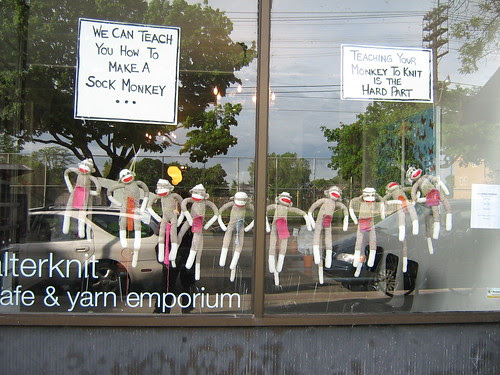 What also got me giggling was someone's (I can't remember who, was it Barb?) comment that it looked like all the monkeys were knitting "peter heaters". Hee!

Long story short, I bought a lot of yarn, met a lot of cool people, and I got my picture taken with "The Yarn Harlot" aka "The Wool Pig" aka "Stephanie" 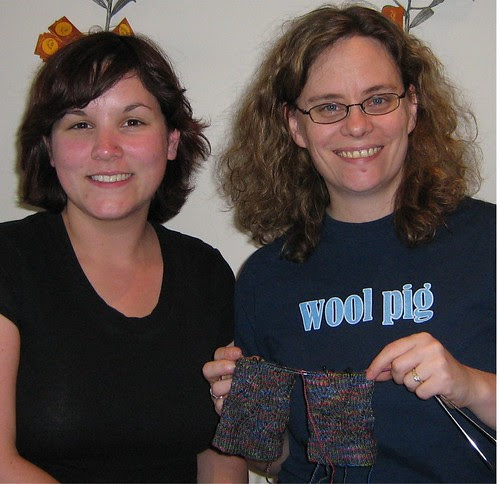 She's holding my socks. She even said they looked good. Speaking of which...