this is the best thing going right now-- my new nephew 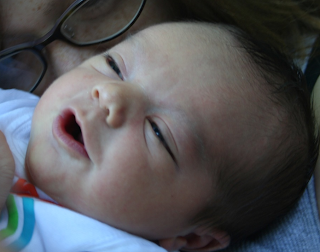 with the blanket i knit for him (see, i still blog about knitting), 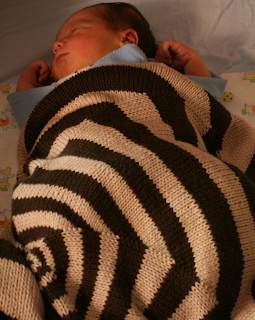 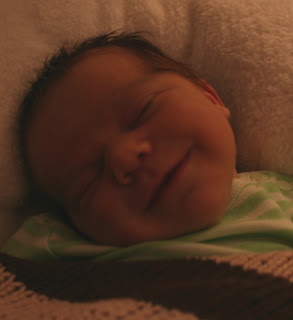 yeah, i'm totally in love. i'm much too far away to snuggle him properly, so i have to gush over pictures instead.

don't mind me, i'm just going to sit over here in the corner until my ovaries stop twitching...
Posted by divy at Wednesday, August 25, 2010 No comments:

sometimes i hate writing. no, that's not really true, i always love actually writing, putting words on (virtual) paper and making them sound, you know, good, and stuff. (get off my back. i'm saving all my prose-writing energy for the real stuff...)

but the part of writing where i know i need to make something specific happen, and i can't do it because the words, or the characters, won't cooperate, that just sucks.

it's like with knitting- knitting back and forth without worrying about what you're making is easy- though usually you end up with not much more than a strip of plain knitting- wheee, scarves. if you want something that actually looks like something (sweater, socks, whatever) you need to make changes, shift, manipulate the stitches differently, add and decrease. and usually you have a pattern that tells you how and when to do this so you end up with something that looks like something you wanted it to look like in the first place. (hello, train of thought? where did you go?)

but writing isn't like knitting. because there isn't a pattern for a good story. there are guidelines, sure, and if you outline obsessively you can sort of shape the final product before you write it. (but i can't outline, and besides, that's another post). so for me, writing is like knitting a giant piece of shapeless nothing and just crossing your fingers that you can turn it into something decent when you're done.

phew. this post is brought to you by poorly crafted, tenuous metaphors.

(it's a good thing i'm pushing this post down later today with something far far more awesome.)
Posted by divy at Wednesday, August 25, 2010 No comments:

hey blog, i'm going to rant at you for a bit, okay? because frankly, no one else wants to hear it (the husband has been listening to this rant patiently for a few days, but i just can't subject him to it anymore. also, he's at work.)

i'm writing a piece of short fiction. i actually have a sort of a deadline too. for the first time, i'm writing something because i was asked to, not because i just feel like it, and it's a fantastic feeling to know that anyone besides me is actually interested in my work! i was given a very broad category, a working title as a prompt, and i immediately came up with a perfect idea.

perfect, if you ignore the part where i spent ten minutes alternately typing and sobbing. stupid fucking emotions. writing something that depressing has long-term consequences on my mood, and i just can't afford to be a weepy, grumpy ball of grr right now.

so, i brainstorm, come up with two or three other fairly decent ideas before i settle on the idea. the one that i know will work, that has a beginning, middle, end, conflict, interesting characters, potential to be both touching and humourous (a balance i try to strike most of the time. also, is it just me or are there too many 'u's in humourous?)

so there's no problem, right? oh, until there's a problem. i can't write it. i feel like i'm stuttering, like i keep starting and getting a few sentences out but then the rest of it just stops. ideas shut off, gone. my ability to write readable prose seems to have disappeared as well. my dialogue is stilted. i hate my characters. i don't think the conflict is all that interesting anymore, and i don't know if i can fix it. (i'll grant that my husband read what i have so far and he thinks it's good. i don't think he's lying to spare my feelings, but i also don't think he's a very unbiased source.)

i don't have time to start from scratch with a new idea. besides that, i like this idea, i really do, and i really think it will make a good story if i can just get it the fuck out of my brain!

if you need me, i'll be bashing my head against the keyboard.
Posted by divy at Monday, August 23, 2010 No comments:

and if you don't already have one, you probably will once you see the pictures.

whenever there are small repairs to be done on an outside wall of one of the apartments, the workers build a little bamboo scaffolding outside the window. they're like makeshift balconies, and the mere idea of stepping out on one gives me the shakes. a friend of ours had work done on their apartment, and apparently the workers warned them not to let the kids out to play on the scaffold after they'd left. they live on the 36th floor. umm, yeah, i'm not thinking that's going to be a problem...

the other day, the same friend called us (they live across the complex) to point out another apartment that was being worked on. they were at the very beginning stages of building the scaffolding, so there were just a few metal beams sticking out of the wall. and a guy straddling the beam, harnessed by a strap around his waist (the harness may have been more secure than it looked, to be fair. i wasn't that close). 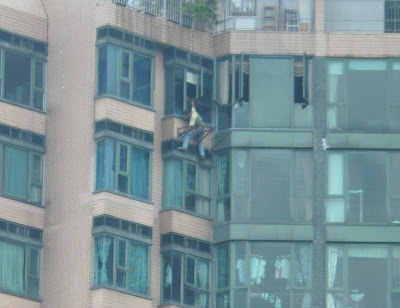 this was also on the 36th floor. here's a pic of the full building, just for perspective. i've circled the guy above in red. if you can't see him, look up, waaaay up... 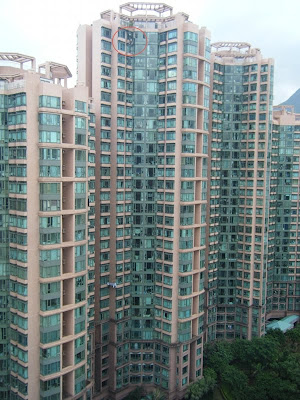 yeah. i really don't have anything else to say about that. on the plus side, neither of my kids want to do that job when they grow up. one less thing to worry about, i guess.
Posted by divy at Sunday, August 15, 2010 1 comment:

right now, i feel like home is a million miles away. i have some fantastic friends out here (one is currently taking my boys swimming, giving me some precious alone time. gotta love that) and once school starts and i get into a routine, i'm sure that things will be okay here. i'm sure of it.

but now, all i can think is how much i miss my mom and my sister making me laugh myself silly and giving me big squishy hugs. i miss talking my dad's ear off about writing, and listening to him talk my ear off about food. i miss playing guitar and singing with my big, grown-up nephew. i miss the tiny baby nephew that is going to be born any day now (i didn't realize you could miss someone you've never even met) and i miss my brother and (as-good-as) sister-in-law, who are doing awesome getting ready for this new little life.

i miss home. there's nothing wrong with hong kong, but dammit, it isn't home.
Posted by divy at Monday, August 09, 2010 No comments:

justified self-doubt, or am i just procrastinating again?

i wrote 20K words in 10 days, that was kind of cool. and i do like the ideas that i formed in that time, i even think it might make a decent story... someday. right now, i've managed to talk (think) myself out of working on that particular plot. i lost focus, lost the grasp on what i wanted from my characters and my story, and i started to question whether the idea i had could really be carried on for another 50-60K words. basically, i bailed. just like i told myself i wouldn't. i figured once i had 20K words it would be a lot harder to abandon the idea. apparently not.

i realized i have 3 months until NaNoWriMo, and I will do that again this year, no question. So i figured, 3 months is more than enough time to bang out a first draft on one of the myriad ideas i've come up with since april. i picked the idea i've had the longest, the one that i felt had the most potential, the one i've already written the beginning to twice (both times i fizzled out after about 5K words). i tried a new approach. i changed POV and tense, i changed my mc name (i hated her original name anyway) and i made it 10K words in... then i started thinking about it again.

several major plot points started unraveling. if character A does this, why doesn't character B just do that? what's the character's motivation for this? why is she behaving this way instead of that? and all my questions were totally valid and entirely unanswerable. seriously, i don't know how i have had this idea bouncing around in my head for so long and not noticed all the problems with it until now.

i had a clear idea of where i wanted this to go, i even had something i would call an outline, and i hate outlines. maybe that was part of the problem. writing into an outline has sapped my will to write.

so i went back to the drawing board, so to speak. i went back to the original ideas that spawned this whole story, and it boils down to the two main characters and the setting. everything that came after that (the characters' families, their romantic pasts, their jobs) is probably going to go out the window.

now i can't decide whether i'm just excusing this pattern of behaviour (which is- write write write, oh wait, that sucks, nevermind...) or if i actually might have a better plot to stick these characters into. i suspect this is just another way for me to justify to myself the fact that i am abandoning yet another wip.

so, in keeping with my pattern, after the 'nevermind' i need to spend at least three days beating myself up for abandoning this before i can get back to writing properly. gah.

this blog post has been brought to you by the little voice in my head that says 'you suck'. i should probably see about getting that removed...
Posted by divy at Monday, August 02, 2010 No comments: